What's in a Greek salad?

Ordering a Greek salad outside of Greece is easy, and you always know what to expect. Ordering a salad in Greece can sometimes throw people off, given that a traditional Greek salad does not have lettuce. Nor does it have that odd looking jalapeno a lot of restaurants put on top of their salads. It especially doesn't come with any sort of branded dressing.

A traditional Greek salad, which you'll often heard referred to as a horiatiki, literally meaning, of the town, looks something like this: 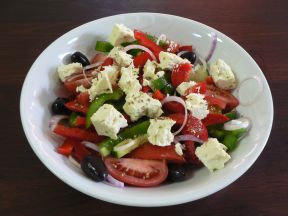 Plain and delicious: red tomatoes, cucumber, red onion, blocks of feta and olives, dressed in olive oil, vinegar and oregano. Of course, there are lots of variations throughout Greece, such as added fresh green pepper or capers, among other things.

So, basically, the Greek salad most of you are used to is a Greek-American salad (or  Greek-Canadian, or a Greek-German, etc.), whereas the horiatiki salad is something really Greek.

Next time you get a Greek salad, impress your friends and see if the restaurant can make you a horiatiki!

Want to take it one step further and learn how to say the word, horiatiki? 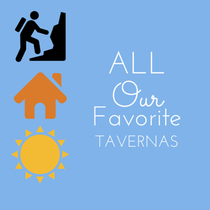